The holidays are a busy time for parents. Not only are we busy decorating, gift-shopping, party-throwing, tree-trimming, threatening and bribing, but we also need to keep things straight in the elaborate web of lies we’ve created around an imaginary fat stranger who spies on us all year and then sneaks into our homes one night to bring gifts to kids he’s deemed worthy. Here are some I’ve fielded from my kids recently, and my responses:

1. Does Santa fill the boxes in our Santa-shaped advent calendar?

A good lie has to be at least minimally plausible. Even though the overall Santa story is suspect, there are a ton of books and movies to back it up. But there’s no movie called, “The 24 Nights Before Christmas” or anything like that, where Santa travels to millions of houses December 1st-23th to fill an IKEA advent calendar with the most annoyingly small sized gifts that are extremely difficult to find in stores. So I went with “no” for this one. I admitted that I fill them up. It felt great.

2. Is the Santa at the mall/Jordan’s Furniture/Copley Plaza Hotel the real Santa? 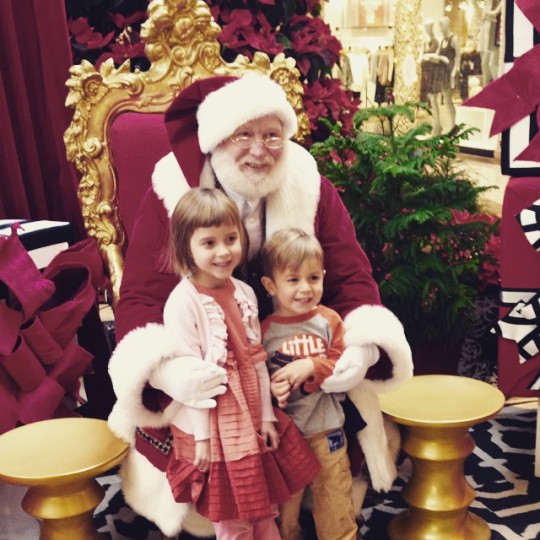 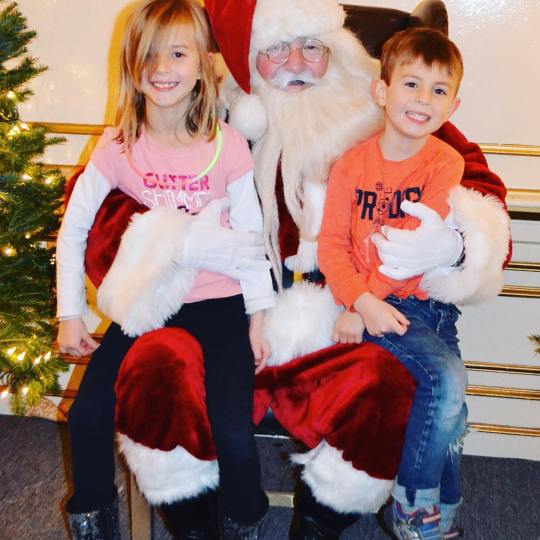 Yes, all these guys are the same people. No, just kidding. I knew Hazel was too smart to buy it, so I said that they were just different people dressing up as the big guy. After all, Santa can’t be at all these malls. He’s in the North Pole getting ready for the Big Day. However, Santa at the Copley Hotel this year did tell the kids they need to stop fighting so much, so I told Hazy that maybe he was the real deal, because “how did he know that?”.

Sighhhhhhhhhhh. Mumbled something about Santa only comes to houses where people believe in him.

4) How does Santa know if we’ve been bad?

I feel really creepy telling them this strange man is watching them all the time. So while I do occasionally say, “Remember, Santa’s watching” because of that “He knows when you’ve been sleeping” song (speaking of creepy), I usually just make up something about calling Santa on the phone frequently.

5) How does Santa get into our house since we don’t have a chimney?

I’d like to thank The Santa Clause for fielding this one for me. In case you’re wondering if this 1994 Tim Allen movie is dated, it is. The effects are crap, but fortunately, kids are not picky about these things. Apparently, Santa has some kind of magic ability to shrink into any sort of chimney-esque opening, even the small pipe we have.

Asking for one thing is like telling Santa has has to get you that or nothing. You don’t give ultimatums to Santa. You just don’t. Give him some other choices or he’ll go rogue, and you don’t want that.

7) How come Santa didn’t bring me any of the 35 guns I circled in the Target catalog?

Haven’t been asked this one yet, but I’m preparing my answer. I’m hoping they’ll be too excited about all their other loot to notice the lack of firearms.

Anyone else fielded any tough questions? Please share your knowledge with the rest of us.