Dear Everyone Who’s Ever Emailed Me,

In the words of the unlikable Justin Bieber, is it too late now to say sorry?

I have a serious email problem. (Nope, not the one about the sign offs.) Like 4,271 unread emails serious. I also have the crappiest system ever invented for responding to emails. The system is this: mark important emails as “unread” so I know they’re important. You can imagine how well that’s working for me.

I pay Google $1.99/month for additional storage, which, in the grand scheme of things, isn’t a lot of money. But there’s something very sucker punchy about getting an email receipt every month reminding you that you’re getting charged for your unmanageable email problem. To add insult to injury, the email comes from “Google Play,” and almost every time I see it, I’m like, “Wait, I didn’t order a game…oh.” Suck-er punch.

I would like to just delete all my emails and start from an empty in box, but it turns out I’m a digital hoarder. But instead of old newspapers and decomposing cat bodies, I have old emails that I “might need to reference,” like order confirmations from companies like Hockcock (allegedly a puzzle company) and BrightBite (I got an ultrasonic tooth cleaner because I’m more serious about oral hygiene than Pretty Woman) or correspondences with former employers or future job references. Plus, there are the ones I keep for sentimental reasons, like the thread from our girls’ trip in 2016. (I’m sure there’s a thread from an earlier girls’ trip, but I got tired of scrolling through emails, story of my life.)

But I’d like to say that it’s not all my fault. Emails multiply like wet gremlins. I’m not exaggerating when I say I ordered ONE THING from Nordstrom ONE TIME. 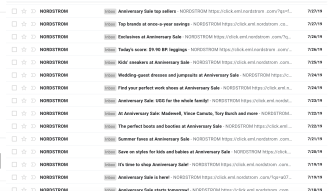 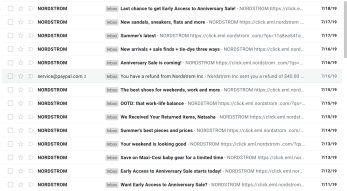 This is just a ONE MONTH sample of the emails that followed.

Aside from the stress of the digital clutter, the drawback of having so many emails is that I miss important emails all the time. A couple of days ago, while I was in the middle of a draft of this post, I found an email from a friend, asking me if an old coworker was a good guy because he was interviewing at her company. The old coworker is a great guy! The email was 5 days old! I only saw it because Gmail does that thing where they’re like, “Received 5 days ago. Reply?” In other words, “Hey hot mess, want to stop being an inconsiderate dick?” Yes, yes I do, Gmail. Fortunately, it wasn’t too late to weigh in, or at least, that’s what my very understanding friend told me. But who knows how many great guys’ job opportunities I’ve sabotaged with my horrible email habits?

Speaking of great guy job opportunities…a few years ago, while I was freelancing, I stumbled (and there’s really no better word for it) on a months-old email asking me if I was available for work. Anyone who’s freelanced knows an email like that is more valuable than a rediscovered stash of Thin Mints found in the freezer during the off season. Not only did I miss out on a much-needed job, but I was unprofessional and rude, not exactly the best look for a freelancer. Fewer jobs = less money = fewer Girl Scout cookies = not living my best life.

Here’s another thing I’m realizing: even if I deleted all my emails today, they still keep coming! I just counted; I got 63 emails yesterday. Here’s just a small sample:

For the record, I don’t know how or why I got on the Trump email listserve, but I kind of like it for both masochistic reasons and because I find it fascinating to read the kind of crap that they’re serving up to Trump supporters. (By the way, if you’re wondering “what comes next” according to the Trump campaign, he wins CA in 2020. Huzzah!)

I definitely don’t delete 63 emails a day. In a good week, I might delete 63 emails. So that means, about 378 emails are getting added per week. And then anytime I buy something online (I’m looking at you, Nordstrom), there’s another vicious cycle of emails.

I want you to know that I’m trying to do something about the problem. In addition to adding “shitty at email” to the list of things I berate myself about (after “lost patience with kids again” and “didn’t silence inner nacho voice”)  during my daily internal-Festivus time, I have taken some physical actions as well.

I joined UnRoll.me a while ago. This service combines a bunch of less-important emails into a daily digest, so what was once 20 trash emails is now one mega-trash email. Yes, a stronger woman would just unsubscribe from all those trash emails, but then she wouldn’t know that Bertucci’s just started doing Thirsty Thursdays, where you get a large pizza, a dozen Calabrese wings, a bag of rolls, and a 6-pack of beer for $40.

Secondly, I’ve committed to unsubscribing from 20 emails a day and deleting all the emails from that sender. For example, I just unsubscribed from Photobook America and AdAge news alerts and deleted 74 and 119 unread emails respectively. Only 4,078 emails to go! Just think how many I’ll delete while I’m mainlining Bertucci’s rolls on Thursday.

I also employ Gmail’s Primary/Social/Promotions filtering system, which is dubious at best, but at least we’re trying.

I’m reading articles about how to minimize digital clutter and 10 Steps to tame your in-box, trying to teach this dog some new tricks, kinda like this old Polish guy, only not as adorable.

So, everyone who’s ever sent me an email, just know that your email may be a decomposing cat lost among the 50,000 creepy old dolls that is my in-box. And please accept my sincere apology for not getting back to you in a timely fashion. Unless you’re spam from some annoying company, in which case, UNSUBSCRIBE. [Side note: if you’re a company that requires people to either a) type in their email address, or b) check off a list of reasons why they’re unsubscribing, you’re a dick!]

One thought on “Dear Everyone Who’s Ever Emailed Me,”