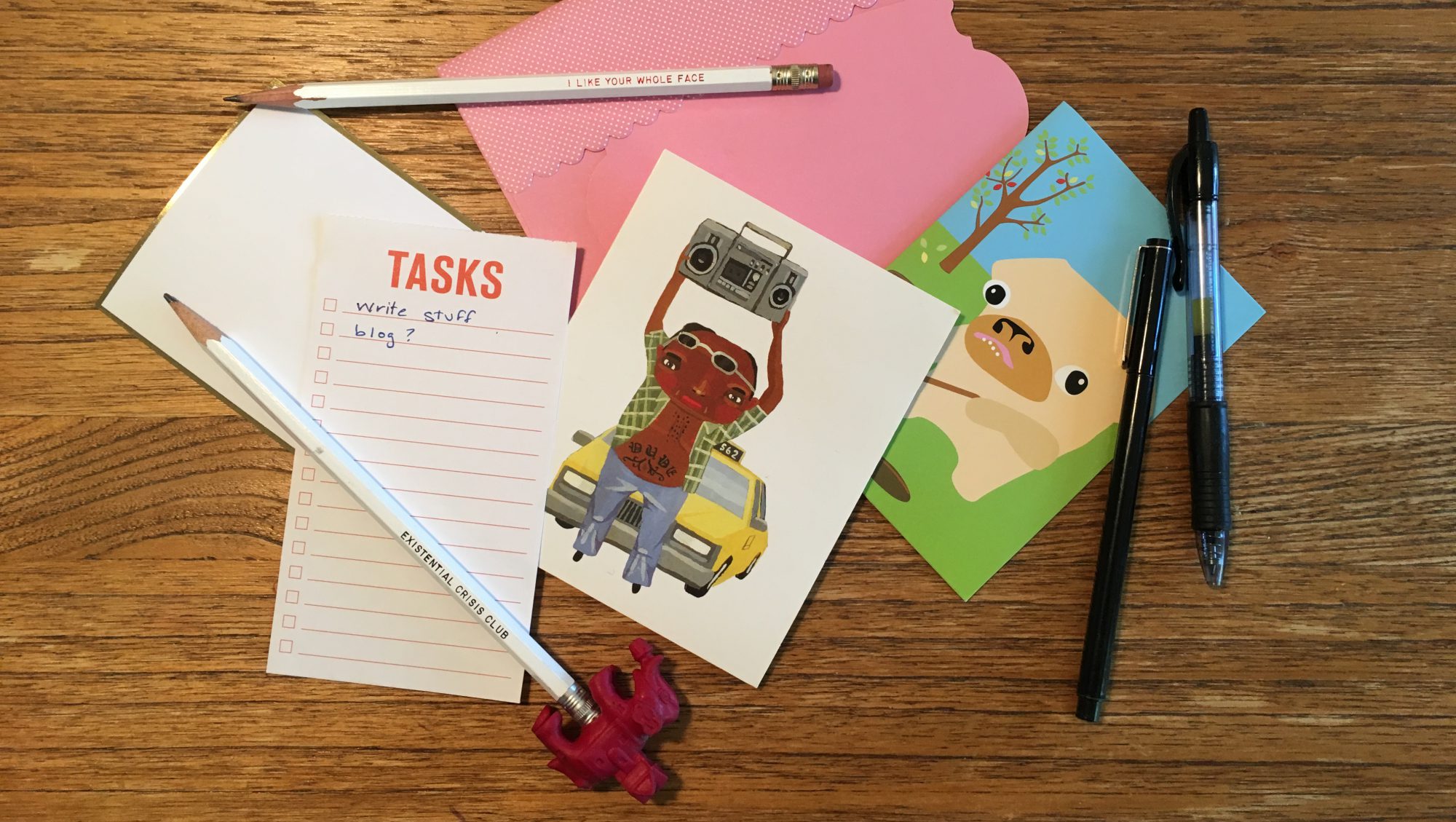 When I was little, I dreamed of being a lot of things: an actress, a veterinarian, a businesswoman named Diane Verenburg (don’t ask), a mom, sure, but never specifically a soccer mom. I just don’t think that was a thing when I was growing up. We didn’t do so many “activities.” We just rode our bikes around in a makeshift bike gang and came home when it got dark. But anyway, here we are and I’m a soccer mom.

I take the kids to practice twice a week and double up on games on Saturdays. When I’m not washing soccer shirts and tripping over cleats, yelling, “Who left their cleats here?” I’m rinsing out water bottles, after removing the beer coozy Hazy puts on hers that says, “So what if I’m 40? I can still kick your ass”. I have those canvas chairs that fold into their own carrying sling, a deflated ball on the front lawn, and a minivan with a family of stick figures and a soccer ball. Just kidding, I drive a Prius named Taco, without any stickers. With five years under my belt as a soccer mom, I’d like to share with you the secrets I’ve learned about the natural progression of children’s soccer. 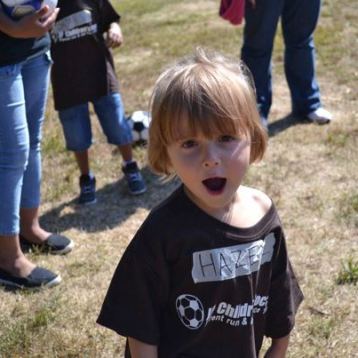 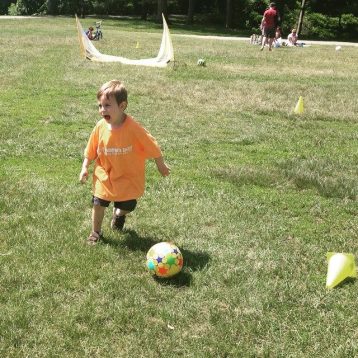 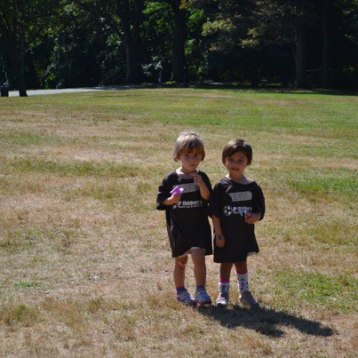 In Stage 1, everything is so goddamn adorable. The one-size-fits-all-like-a-nightgown t-shirts. The mini, size 3, soccer balls. The team names. like the Teal Seals and the Tangerine Lions. I wouldn’t really call this stage “soccer” per se, as they mainly just play games that sometimes vaguely involve the mini soccer balls and everything is centered around The Snack. After George once asked if he could go to soccer, have the snack and then leave, we started calling it Snack Team and encouraging him to take a brief soccer break during practice. Occasionally he did, and we’d call that a win. 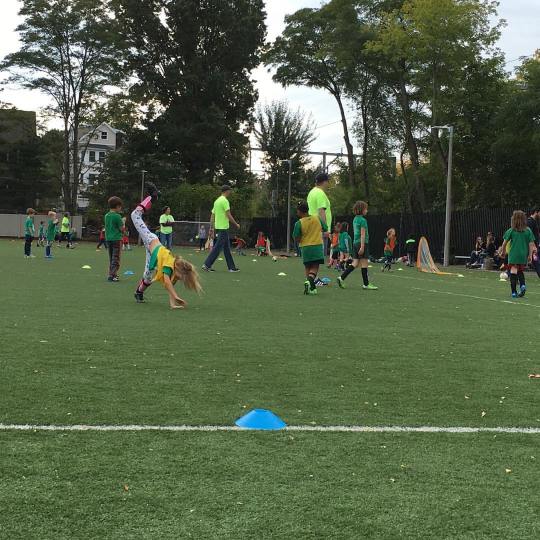 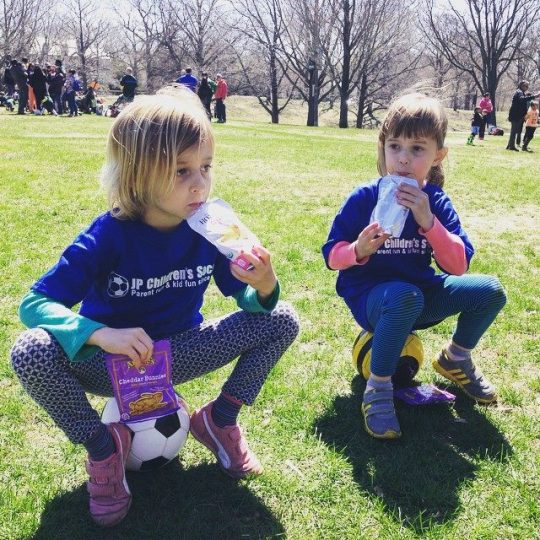 This is still not quite soccer, but they do more soccer-like stuff, like actually kicking the ball. Snacks still outrank soccer though. At our soccer field, there’s a big valley right next to the field. Running down into and back out of the valley also outranks soccer. Doing cartwheels? Yep, outranks soccer. But the good news is that at this stage, they start to play soccer games. Not actual soccer games, mind you, but games like Messy Backyard, where the kids try to kick all the balls onto the parents’ side/backyard and the parents try to kick them into the kids’ backyard. Some parents try to be all nice and let the kids win, but not this soccer mom! These kids need to learn the realities of competition and yard maintenance. Unlike in real life, my backyard is always immaculate in Messy Backyard. (Sorry about that one time I kicked the ball into your head, young member of the Blueberry Gorillas. Gotta keep the backyard clean!) 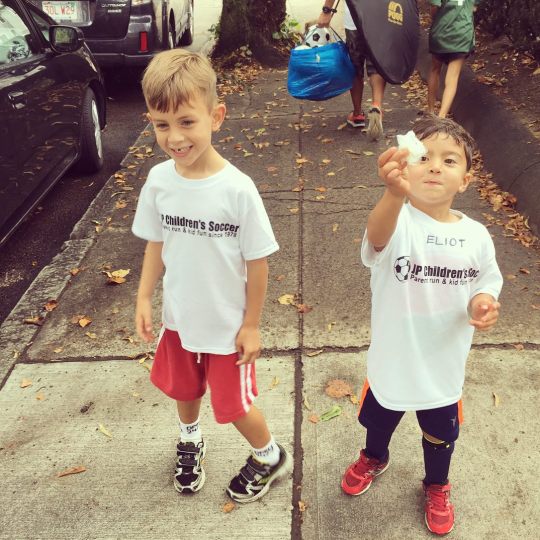 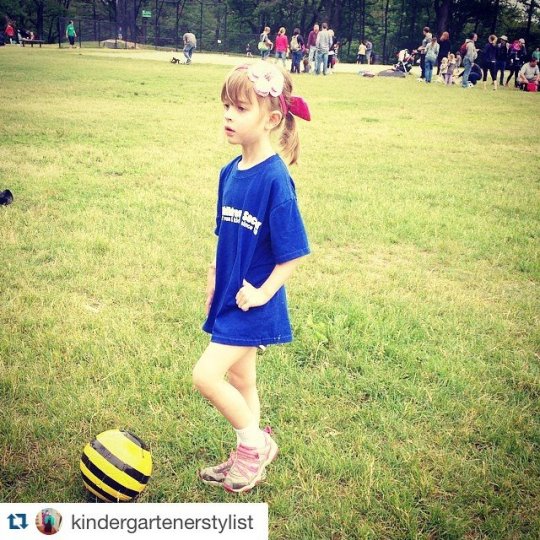 Is this “soccer”? Would, hypothetically, your friend’s father, straight out of Manchester, England, come watch this soccer and see any vague resemblance to the footy he eats, sleeps, and breathes? No, no it is not. BUT, kids are interacting with a soccer ball (mostly with their feet!), sometimes dribbling the ball, and learning that kicking the ball into the goal is a good thing. This is where George is now, with the rest of his team, the Marshmallow White Pandas (What? You come up with a cool name for the White Team!). I don’t know if this is universal to Stage 3 or just my particular Marshmallow Panda, but I notice a lot of whining at this stage. Maybe that’s why the only similarity to real British football is that sometimes I think some of the people in the crowd (i.e. parents) might be pretty drunk. 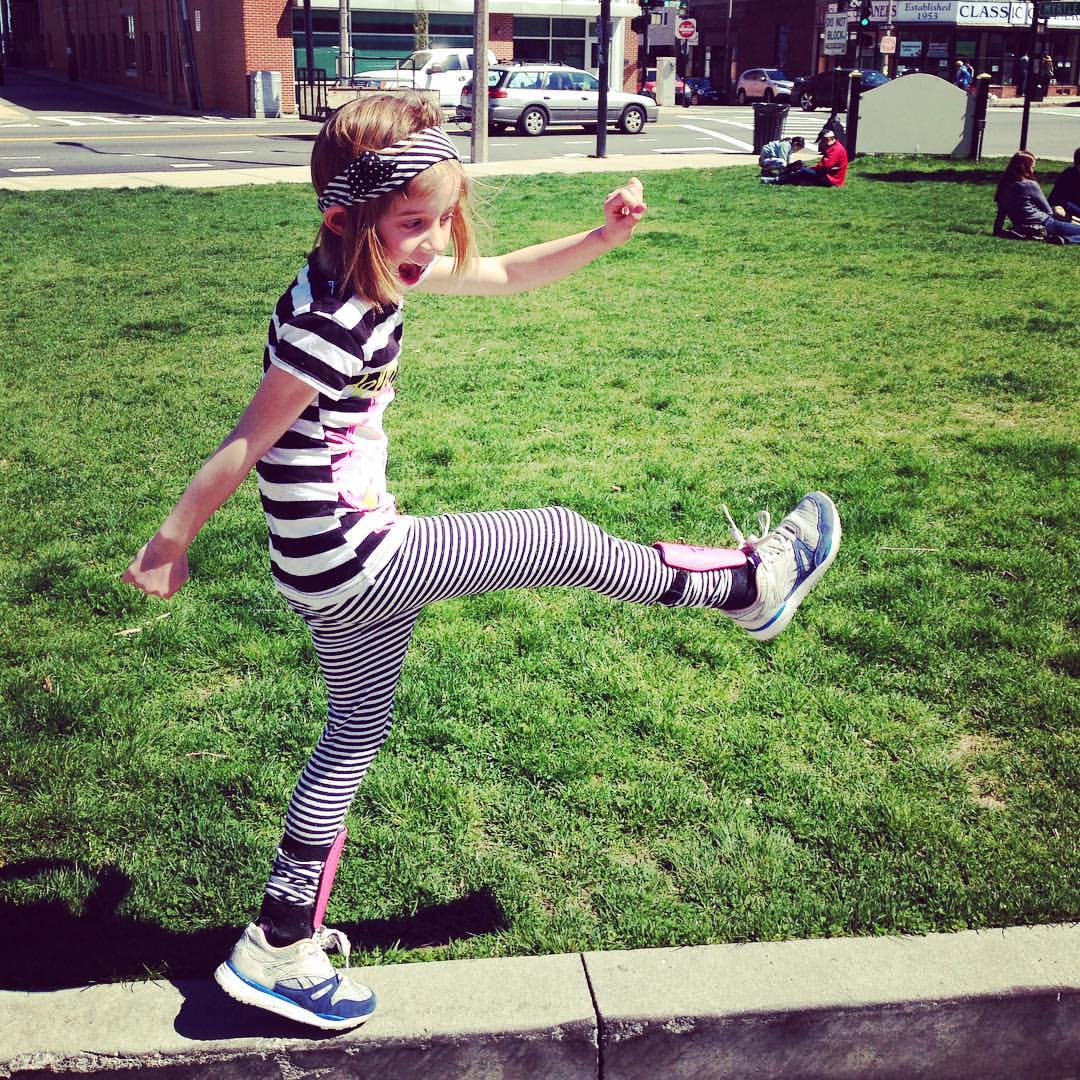 At this stage, at least in our neighborhood, they move up to big kid soccer. So whereas they used to play JP Children’s Soccer, around age 7, they move up to JP Youth Soccer. If you’ve ever wondered what the difference is between children and youth, mystery solved: youth are slightly older than children. And guess what? Youth actually play soccer games! Not soccer-themed games (I miss you, Messy Backyard), but actual games of soccer, where there are two sides and players on each side and soccer is more important than snacks. Just kidding, snacks are always more important than soccer. Even when you’re a 42-year old non-soccer player. Especially then. 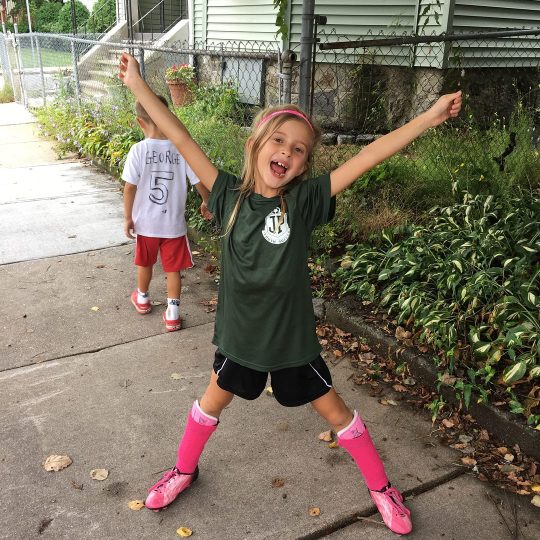 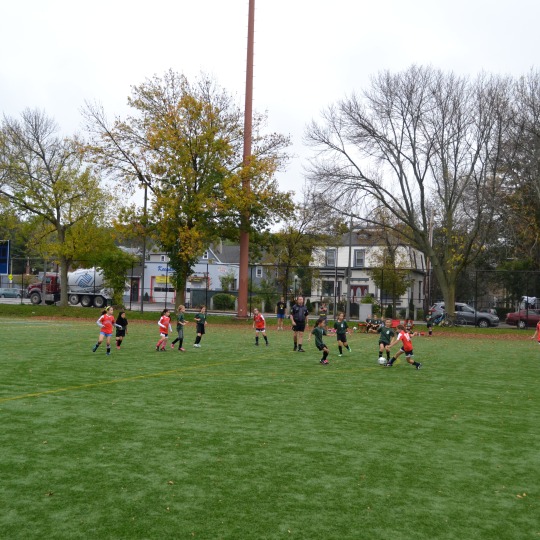 Yeah, I’m gonna call this actual soccer! After a year of youth soccer, the kids are given the option of joining the travel team, which means they have practice two days a week plus a real game against another team every weekend. Plus, the kids no longer come up with the team names, so instead of the Grey White Sharks (although if you say that out loud, it’s pretty cool) or the Brown Bears, we’re the JP Lynx. Pretty badass, right?

I finally get why anyone actually enjoys being a soccer mom now. Watching the JP Lynx play is just like watching a Patriots game on TV. Except it’s not on TV, it’s live! And it’s not football it’s “football!” And you know all the players! And some of the players are playing with their hair instead of playing soccer and you have to yell at them, “HAZE, STOP PLAYING WITH YOUR HAIR!” and then you get in trouble because parents aren’t supposed to be yelling in the JPYS league. And instead of superstar Tom Brady, we have superstar Pru, except I’m pretty sure Pru is allowed to eat dairy and sugar and nightshades (look it up). So it’s not exactly like watching the Patriots, except for the excitement level.

The Lynx went something like 0-13 and 0-8 their first two games, so when they scored their first, and then their second, goal in the third game, there wasn’t a dry eye on the field. It was pretty much like any episode of Friday Night Lights, except Riggins wasn’t there. Good lord what I wouldn’t give for Riggins to be there but we’re getting distracted. Anyway, what I’m trying to say is that Stage 5 is super exciting, I’m in love with fictional character Tim Riggins, and in retrospect, I’m so glad I became a soccer mom instead of Diane Verenburg.

One thought on “Stages of Children’s Soccer”