I already had some things in mind when I went to write this. Then I googled, “Things you should know how to…”, and discovered so many more inadequacies. Thanks, interwebs!

Here’s just a small sampling of Things I Don’t Know How To Do (But Should):

I’m completely serious when I say that it was within the last two years that I learned that the horizontal line in a capital G doesn’t go all the way. It takes 99% of my concentration to write a G that you won’t mistake for a 6. Probably shouldn’t have named my son George, or 6eorge, as many know him. By the way, this wasn’t on the list of 25 Things Everyone Should Know How To Do by 25 because I’m pretty sure most people master this by kindergarten.

Practically, I know how to iron. You heat it up, and apply some pressure with the iron to the article of clothing, moving it around in little circles. I understand that’s how it works. It’s just that when I do it, it doesn’t work. It doesn’t do anything. My clothes look the same after I’ve “ironed” them as they did before. Can you tell which one is before and which is after? Neither can my husband/coworkers/people giving me pitying looks on the street.

The only thing sadder than a grown woman being unable to do her own make up is a grown woman watching those YouTube videos on how to put on make up and failing miserably. And by sadder, I might mean funnier. If I had a magic wand that instantly gave me any special talent, I’d want to be able to contour like Jennifer Aniston. That’s a lie; my first wish would be to be able to sing like Adele. Aniston contouring skills would be a close second. I’m too embarrassed to post a before/after because it’s too similar to the ironing before/after.

Here’s how it usually goes when I prepare to ask for a raise.

This is kind of like ironing. I know “how” to do it; I just suck at it. I even sewed a teal blue stuffed walrus in 7th grade Home Ec. (Also, ask me about my Microwaved Apple Crumble recipe!) Yes, I’m old enough that I had Home Ec in junior high, but not old enough to know how to write a proper G. Thank you, Matty, for doing my sewing for me.

There’s an old sailor’s saying, “If you don’t know how to tie a knot, tie a lot.” That’s kind of my photography philosophy. So, for example, if Hazy is looking so chic and grown up drinking her Starbucks in her red boots, I’ll follow her around like she’s Teresa Giudice and I’m a paparazzo and it’s late 2014. Later, I’ll upload all my photos to our home computer, and be too overwhelmed by their sheer numbers to delete the ones where she’s a) walking away from me, b) a blur, or c) drizzling hot chocolate dregs down her chin (although come on, that’s a keeper). Multiply this times EVERY DAY FOR 8 YEARS and you get an idea of how many photos are currently jamming up my computer. 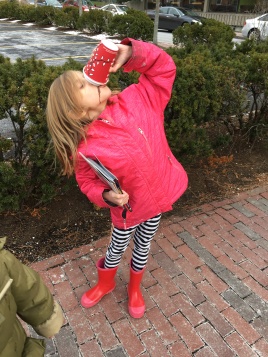 Next thing you know, I have 14,000 pictures on our home computer, and it takes 10 minutes to perform simple tasks like “opening Microsoft Word” or “emptying trash” or “force quit everything.”

8) Exhibit One Small Shred of Will Power

These are called Million Dollar Bars.

I’ve been putting on a few pounds lately, so I told myself I’d just eat half of one of these to enjoy the taste. Well, it turns out I really enjoyed the taste. So much, I went back and ate the other half. And then another sliver. And another. I’ve now had about three million dollars in bars. It’s only 1:24.

Please make me feel better about myself by confessing something you can’t do in the comments.